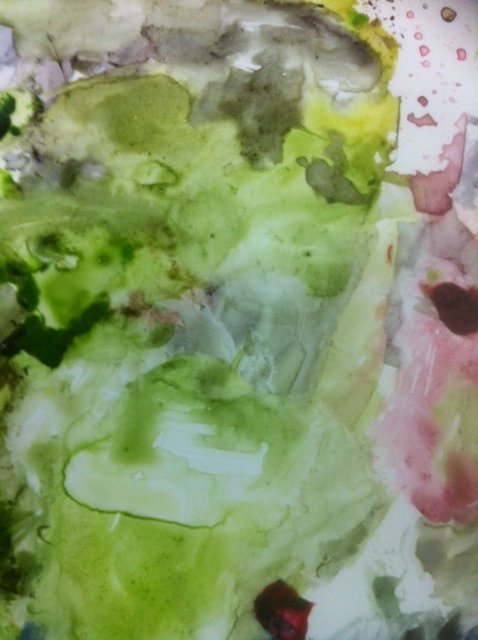 This is one of those ‘happy accidents’ we hear about so often. I was sitting next to fellow Society of Marple Artists member Jean on an ‘own work’ evening when I noticed her watercolour palette had an interesting look about it. I took some photos on my iPhone and a few people gathered round to see what was going on.

Would you believe, all five viewers saw different images, from a baby to some Brussels sprouts! This is a great example of just how subjective the whole art thing can be. What one person’s eyes translate via the brain can be radically at odds with the next. I have come across this with adverts, posters and the written word, too and I well remember exhibiting an untitled acrylic painting a few years ago which garnered comments from onlookers who variously saw a seascape, a desert (!) the Pyramids, a racetrack and even an armed soldier standing over a dead colleague on a battleground…sorry, but I wouldn’t have painted a sad scene like that. Last year, I had someone buy one of my local Cheshire/Derbyshire scenes, complete with rocks and drystone walling. She said to her husband ‘you know where that is, don’t you?’ As I helpfully started to explain that it was just a few miles up the road, a well known sight known as Black Rocks, above Disley, she said ‘it’s you know, Puerto del (somewhere), near where we stayed in Lanzarote three years ago’. Me doth protest, but to no avail and she asked her husband to buy the painting for her imminent birthday, which he duly did. I have since visited them at home wearing my other head as their trusted car supplier and seen the ‘Lanzarote’ artwork in pride of place in their lounge. It obviously isn’t only football which is ‘a funny old game’!